Due to Covid-19 current exhibitions have been postponed. 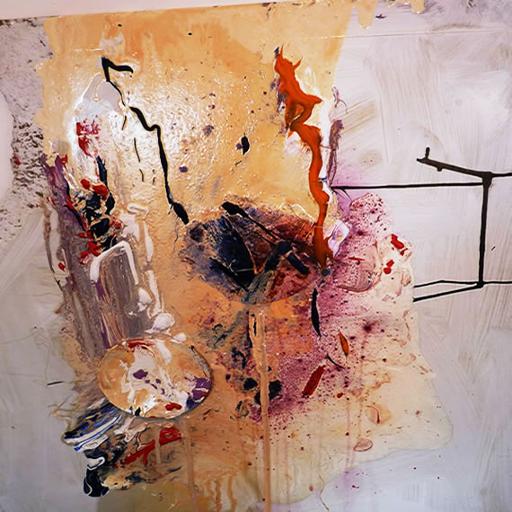 Bob Lawson is an abstract painter specialising in an exploration of materiality, largely focusing on the use of commercially available gloss and eggshell paint, as well as varnish and bitumin. In recent years he has also constructed collages rooted in 'urban archaeology', collecting billboard materials and signage in Venice, Thessaloniki, Heraklion and Granada: the endeavour is to recreate a montage of recent historical events that encapsulate a sense of place and identity. 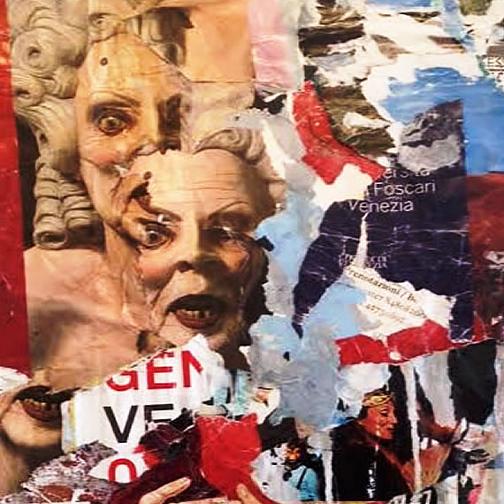 Working with ripped or lacerated fly posters I have created a body of work collated over several years which is a process rooted in 'urban archaeology'.  Using images, symbols, letters and colour it is an attempt to recreate a sense of place and a redefined identity. This echoes the New Realism movement of the 1960's, and focuses on the marginal remains of civilisation as evidenced in what has happened in any given social context. Materials have been collected in Venice, Thessaloniki, Granada, Heraklion and Limoges and this is ongoing.

Currently on show in Oxacca, Mexico at the museum of Contemporay Art, EMPIRE II is an artist led satellite project devised and curated by Vanya Balogh for 57th La Biennale di Venezia. This intimate, immersive film hub space will feature three chambers; beginning with an extensive library, engaging in film history and theory, curated attentively by participating artists from their personal book collections and intended for browsing and perusing; leading further on to a single screen darkroom, a pulsating digital heart, showcasing a sequence of 115 imaginative short films programmed to play on the continuous loop; and on to the final imaginary space, the Virtual Reality port which will evolve over time in collaboration with various artists. In recent years we have seen an intense and speedy cultural migration and merging of art, architecture and moving image. As empires are built on ruins, so has digital mass evolving from the fractured analogue spectrum of our not so distant past, submerged itself into the fluid fabric of our contemporary worldview.

Mash ups, remakes, samplings, cut-ups; contemporary culture is profoundly fragmented and constantly recreated. What were once avant-garde strategies have now become everyday practices. The ubiquity and diversity of gadgets, cameras and screens is a particularly prominent aspect of this «softwarized» digital culture. Professional filmmakers are seen to use cheap digital cameras in order to create low-tech DIV aesthetics, as exemplified in the Dogme 95 movement initiated by Lars Von Trier and Thomas Vinterberg.

Empire II is a spontaneous reflex point, immersive single screen experience with a library, a hot eye that reflects on the elusiveness and temporarily of the digital image, interweaving various paths, trends and approaches to film making. Ranging from animation to cold cut editing, 115 digital shorts are transported from London via Brussels to Venice, on a hard drive, to reach its final destination that is a hybrid digital canvas, a boundary between independent cinema and contemporary art.

Empire II screen will confront us with ideas on climate change, politics of attrition, immigration, narcissism, sex, despair, love, hate, loss of identity, addiction, violence, false economics, digital rape, cybercrime, space travel, pollution, death and consumerism, all coexisting amongst many concurrent themes. Focused on our present, The Age of Anxiety, whilst turning madness into metaphysics, artists respond and demonstrate their feelings, thoughts and objections to the post truth world incumbent in lies and power struggles.

This temporary digital archive and its narrative of collection and recollection, its ability to exhibit, move and travel at high speed to any corner of the planet, define EMPIRE II as philosophical and social space of transient, ephemeral nature. Akin to story of Maxim Gorky, a Russian airplane designed in 1933/34 by Victor Tupolev at the time when future was socialist, it was the biggest airplane in the world with a wingspan about the same as a Boeing 747.

A flying beast of Soviet propaganda, it had many fancy features, for example a rotary press that could turn out 10000 copies an hour, a darkroom lab for developing aerial photos, a working radio station but also and most importantly a Library and a fully functioning Cinema with a Screen that could unfold on the ground and was big enough for near 10000 people to see clearly. Films of the 21st Century show us brain-worlds, brain-cities and architectures of the mind. We no longer look through characters eyes and we no longer need big cinema screens; we experience their minds. This new emerging visual aesthetic is our future present and our present future compressed in data factors and algorithms. Is it also the end of the cinema as we know it?

Empire II Venice will be accompanied by a 260 pages, full colour limited edition catalogue, designed and produced by Victor Hotz Studio in Switzerland. This bespoke publication is conjured in collaboration with curator Vanya Balogh, and will feature film stills, txt and further explorations on the ideas of Anxiety & Empire.